skip to main | skip to sidebar

This blog is now my journal for Sociable Objects Workshop with Rob Faludi, the class I am taking the second session this summer. 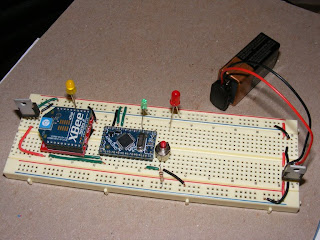 This is the actual doorbell unit, portable and powered by a 9 volt battery. It is running on an arduino mini. When the button is pressed and released, it sends the character 'r' out through the radio. 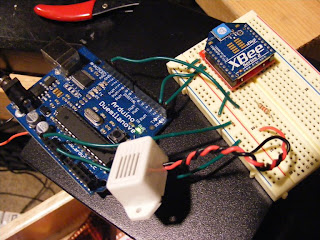 This is the buzzer part of the doorbell unit, powered by a desktop power supply. When the radio recieves the 'r' from the doorbell, the arduino turns on the DC buzzer for 1 second. It also prints the character 'w' for the purpose of feedback.


Although the code is there for the doorbell to light an LED when it recieves the 'w', it hasn't been working. When I write 'w' to the arduino serial directly, it works. I also noticed that one of the radios was working more reliably as the buzzer than the other, and I think the problem may be related to that.
Posted by M_Price at 9:44 PM