skip to main | skip to sidebar

So it's been a few days since the end of the second summer session at NYU. Here is the documentation of all the projects past the doorbell!

No photo:
- I did get my feedback doorbell working, and I used an RGB led to change gradually from blue to red as the bell was 'woken' from its nap.

-The romance light sensor was the second lab assignment. We used an XBee in I/O mode to send a photocell reading over to a radio connected to an arduino. If the photocell reading was in the sweet spot for romance, it lit an led.


Our first major project was an implementation of a sensor (thermistor) network around the floor. My specific job was to build the circuits on breadboards so that they could be connected to power and have an xbee popped in and then forgotten about.
To read about this project in detail, check out Roy Vanegas's awesome documentation:
http://roy.vanegas.org/itp/sociable_objects_workshop/projects/itp_temperature_sensing_network/


The second project was an implementation of the sensor network, with the class split between sensor and actuator groups. The project that we decided on was a fountain that ran whenever someone in the bathroom flushed a toilet. We use capacitance/touch sensors on the toilet handles. I was part of the actuator group, and built a fountain using a small AC pump i bought from an aquarium store.

Somewhere down the line, we also had a one-day partnered assignment to respond to phrases with projects. Responding to "secrets", we modded the doorbell to connect a relay to turn on the audio chip from a hallmark card. The secret part? We detached the speaker and substituted an led to pulse according to the audio. We also built a headphone attachment with a phototransistor and an op amp that could pick up on the signal and turn the light back into sound. (It was the Harry Potter theme). 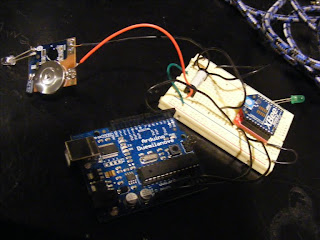 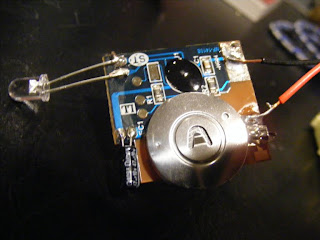 Here is a close up the PCB that was actually inside the Hallmark card (with my LED attached). The two contacts where the wires are attached on the right were originally joined by a switch that was open when a paper strip was between two pieces of metal. 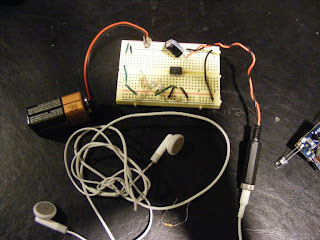 
And finally, I worked with two other people on a final project. The ideal vision was a pendulum that would release different colors of sand depending on activity in different rooms. The activity was to be detected by sound. We got pretty far, but not all the way. The sand-releasing contraption worked well (a servo rotated a disc with a hole in it to line up with one of three reservoirs of sand). The microphone, however, was not nearly sensitive enough (at least as we had it configured). We got it working well enough when you spoke/blew directly into it. Getting the sampling/averaging set up was a bit of work. 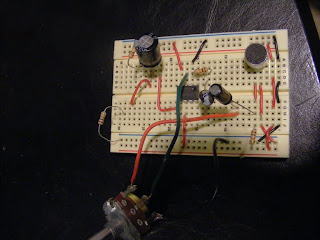 This is the microphone sensor circuit that we used in our final project.
Posted by M_Price at 9:06 PM